ing has been a preoccupation of humans forever. The skies were a mystery to conquer. From building as high as we can, to bird man competitions. When finally we found some better methods such as hot air balloons took to the skies in 1783. The hot air balloons, 11 years later were seen to have military applications and used in that capacity in 1794.  By 1899 flying contraptions were becoming more sophisticated until the plane was invented. And we never looked back. But sometimes we look up and think what’s that? UFO’s have been seen in the Latrobe Valley.

The recorded flying saucers in the Latrobe Valley

On the 24th of March 1954 an unidentified flying object hurtled west through the sky, it was seen south of Morwell. It was described as a silver object with fire trailing it. A man on property in Traralgon South found an atomic balloon in his property later that week.
It had been released from Melbourne University and had covered the distance in 3 hours which was faster than the train could do the journey. An atomic balloon is also known as a skyhook balloon, as pictured below. 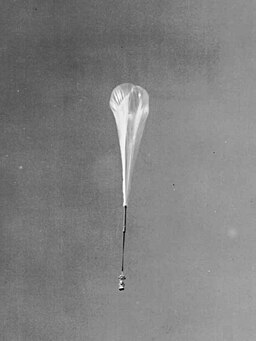 In July 1954 a flying saucer was spotted during the day. There is no description of the flying object. Later that evening a Chinese lantern with a candle attached by string was found on a ladies property in Traralgon.

In 1967 the RAAF investigated reports of a UFO flying through Gippsland at 11pm. The Sale weather bureau informed they released a battery-lit ballooon.

5% of UFO sightings don’t have a stated cause, D.K Thomson said in 1953 who chased and researched sightings of Foo Fighters in the sky.

Locally in the 1970’s, UFO sightings were hitting their peak. Many sightings were seen near the Latrobe River, around Tyers. Strange lights danced in the night sky, causing many a motorist to stop and stare with wonder. Each a little wary about reporting their findings officially as there were many laughing at these reports and speculations. In fact a school group walking in the Harmony Hills, with candles with lights caused locals to call and report UFO’s. It’s difficult to post-research these events as the dates aren’t concrete to discover the conditions on the night and if anything else could have caused, although some of these stories have classic tales of UFO movements, that just couldn’t have been possible.

Anecdotal stories of Unidentified Flying Objects around the Latrobe Valley

A local resident in the Latrobe Valley had a view they can see all the way to Sale on a clear day. This resident regularly saw inexplicable lights in the night sky, movements that couldn’t have been a planet or star. Lights hanging in the sky and would report to the RAAF base, at Sale.

A person riding a horse, high on a hill in Glengarry looked down the hill towards the horizon where they saw a mauve light. Gathering his bearings he looked around and found Venus where it should be. His gaze returned to the mauve light, when it shot upwards and disappeared.

A driver left Traralgon heading towards Glengarry when a low hanging disc with lights followed the driver all the way home before disappearing.

A paper mill worker on an early shift was riding on their bike, when a persistent strange light followed their path. They decided to change direction and go back to Traralgon – in particular the police station and report this as it was quite disconcerting. It followed all the way there, when as he neared the police station it disappeared.

Another time cattle, stood around in a circle, mooing, when the farmer went out to see what the fuss was all about he found they were surrounding a scorch mark in the paddock. Big enough for a UFO to have caused.

A flying saucer in Moe, near Edward Hunter Reserve, near Wirraway Street, was seen in the 1970‘s by two boys, who were out in there, and an independent person of the initial group who’s small window faced the reserve. The boys recall seeing a UFO, they both drew the same disc object independently of each other when they got home. The disc descended on an angle into the reserve the boys were startled and started heading out when they ran into another friend who believed them, as they looked terrified. They all say the disc didn’t make a sound as it descended. 2015 another UFO sighting was reported at Glengarry, originally thinking it was a plane due to the blue, red and white lights, however, when it changed direction three times, the mind changed.

Are the skies ours alone? Do we share them with beings we glimpse out of the corner of our eye?

Great Gippsland Mysteries is a book containing UFO encounters from Gippsland and other mysteries.

If you have a story you want to share with us, please call on 0473 945 639 or email us at hauntedhillstours@gmail.com